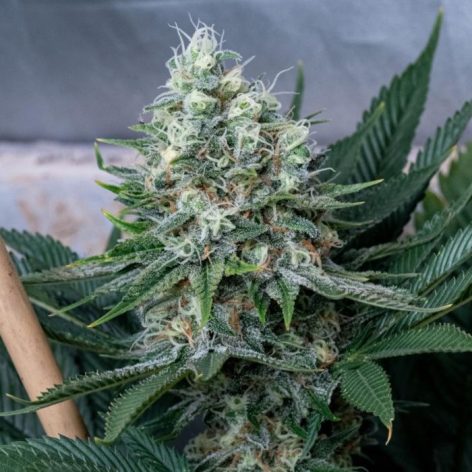 Killer Glue is the third elite cannabis strain to be released by Little Chief Collabs. Harnessing the best properties of two legendary strains, Killer Glue cannabis seeds are sure to be among the most sought after seeds this year.

‘Little Chief’ is the affectionate nickname given to the boss here at PureSativa – and he has, once again, been speaking with his industry buddies, encouraging different elite seedbanks to work together to produce a game-changing strain to go out under this exclusive label.

Killer Glue is derived from Serious Seeds’ infamous AK-47 which is crossed with The Original Glue from GG Strains (the rare strain formerly known as Gorilla Glue 4 or GG4). Unsurprisingly, the resultant hybrid strain is an absolute monster that cannabis seed collectors and breeders in legal environments are going to be clamouring to get their hands on.

Serious Seeds AK-47 is an old school strain from the 1990’s that completely changed what people expected from top shelf Dutch cannabis. AK-47 dominated the awards podiums from the mid 90’s right through to the 2010’s and was still winning awards as recently as 2018. The secret of it’s longevity? Well arguably, that comes down to the stability of the genetics, how easy it is to grow and of course, the sheer potency of the strain. Before AK-47 arrived on the scene, most Amsterdam coffeeshop strains were all much of a muchness in terms of THC levels. AK-47 took things to a new level and signaled the start of the race to the top for the most powerful strains.

GG Strains Original Glue (GG4) – the strain formerly known as Gorilla Glue 4 – is basically a modern-day incarnation of the AK-47 in terms of the impact it had upon the industry. A multiple award-winner, and a genuine break from the norm when it was released. Many legal breeders have had The Original Glue up and over 30% THC and the out-of-control resin production has given this strain an almost cult status.

Killer Glue combines the very best attributes from both parent strains – expect strong, prolific plants with a uniform stature. Dense, tightly packed colas with a thick coating of resin and a complex terpene profile that will keep you guessing between sour, pungent notes from the Glue and sweet, floral flavours from the AK-47. An exquisite limited edition hybrid strain – order yours today while stocks last.